With England’s recent very unexpected victories in the Euros, are brands taking advantage of this unifying force to advertise themselves? Of course they are, and some are doing it in some really creative ways, while others just… aren’t.

Let’s take a look at some of the prominent ads that have been popping up since the prospect of it actually “coming home” has become an attainable goal.

Budlight decided to think inside the box this time with their new campaign. Their new packaging lets you wear a blown up image of some of the team’s players’ faces on your head, providing you finish all the beers first – which shouldn’t be an issue. With players like Kyle Walker and Jordan Pickford on the boxes, the brand cemented itself as the official beverage of the Euros.

Specsavers are known for their tongue-in-cheek marketing campaigns, with so m

any variations on their old motto, “Should have gone to Specsavers.” Referee decisions, fouls or missed penalties could have lent themselves perfectly to that, but instead they’ve spelled out “It’s coming home” in the shape of an eye test. It’s easy to see the thought that was put into this ad.

The Sun vs BT

The British and Danish tabloids crossed swords, or maybe axes in each others’ newspapers, with the Danish paper referencing the Viking raids of old. The Sun then clapped back with an image of the St George Cross in the form of a bacon butty, made with Danish bacon, accompanying the biting quote “We’re having you for breakfast.” Shots fired. Maybe it should have looked more like this.

Some brands have taken to Twitter trying to incorporate “it’s coming home” into their own name. Emphasis on “trying.” Some are a lot more groan worthy than others, but all of them are using Twitter for quirky posts to try and hop on the bandwagon of the current England success.

Tesco jokingly claimed their brand name was actually a loose reference to the original Three Lions song. I mean, a really loose reference. Seems a bit. desperate to us.

This was pointed out by Danny Towley on LinkedIn. I mean, really Tesco, how hard would this have been? God forbid they make one letter of their brand a little bit smaller. 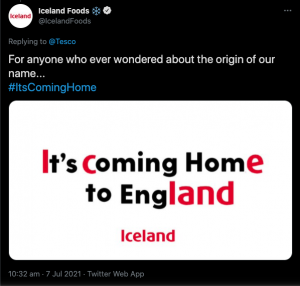 Iceland then followed suit after Tesco’s tweet, using the same caption to accent their equally desperate version of how their brand name features some of the letters needed to create the phrase.

They’ve also updated their Twitter banner in support of England. Let’s hope Sunday doesn’t prove that to have been a waste of time.

Here we have a decent example of this, admittedly this one is a bit easier to come up with, but maybe if you can’t fit a quote into your name, don’t try to force it in there.

So there you have it, a few examples of the brands that have been reaching audiences nationwide with their ad campaigns and social media posts, some being a great success with a great reception and others taking a dive, getting flack from people all around the country. There’s a fine line between a good pun and an absolute cringe fest, and it’s one that a lot of brands have trouble treading.

Be careful out there.